Version 3.0.4 of gPodder has been released today. A new Harmattan package has been built and uploaded to Ovi Store (still waiting in QA) and Apps For MeeGo. You can already get gPodder 3.0.4 for Harmattan from Apps For MeeGo Staging now. Please test this version and review/rate it on apps.formeego.org so it can be put into the non-staging (stable) area of AFM.

The play queue feature comes in handy when you have a long car commute and want to listen to several episodes back to back without having to interact with the screen to play the next episode. It is also helpful to queue up several music podcasts to use as background music while working.

The episode list filters help you to quickly find the episodes you want, e.g. only show episodes that have been downloaded. Text search is not yet possible, but you can now hide deleted episodes just like on Maemo 5.
Eingestellt von thp um 22:38 Keine Kommentare:

gPodder/QML on the N900 - Yesteryear and today

The result is a new video of gPodder/QML on a N900 today, which shows what works and what does not.

If you want to try it yourself, get the latest CSSU for your N900 and enable Extras-Devel (the usual disclaimers apparently still apply). Now, make sure to install all of PySide and Qt Mobility 1.2, and the packages qt-components and qt-components-blanco-theme. The theme package is broken right now, so you need to copy /usr/share/themes/blanco/meegotouch from a Harmattan device or the Harmattan SDK onto your N900 manually. When you have done that, simply checkout gPodder (master branch) from its Git repository.

What doesn't work yet:

Apart from these annoyances (and the problem with the missing blanco theme files), everything else works as one would expect. If these problems get fixed (so that all dependencies are readily available from Extras-Devel), I might be able to make some time to package gPodder 3 for the N900.

Harmattan (N9/N950) users: Have a look at the video to see how the play queue and episode list filters work, which will land in a new gPodder release "soon".

While the first week back in Vienna after the holidays was sad for a Maemoista walking around in the city (aka Admazing (sic) Everyday), there was also enough time to release gPodder 3.0.3 (already in AFM - thanks, testers!), catch up with local Maemoistas at the Hack-A-N9 and work on gotoVienna, the Camerra hack and even more post-3.0.3 gPodder goodness. But one after the other..

gotoVienna is a public transport live ticker app by kelvan. In the days after meeting at the Hack-A-N9, we implemented a nice line number input UI that makes it easy to quickly get live information for a given line - the code is in Git, and as a side-product, merlin1991 has implemented a stdeb/distutils extension to inject an Aegis manifest and create the digsigsums file - check it out if you want to build Python packages for Harmattan without Scratchbox/the SDK.

Next up is the Camerra hack, a quick'n'dirty "app" that monitors the Volume+ hardware button and (when the Camera UI is in the foreground) simulates a click on the shutter button, effectively making the Volume+ work as a shutter button. Ideal for all your self-portraying needs! It's called a hack, because it uses the likes of xprop and xresponse directly - a "proper" implementation would use QmSystem, XTest and Xlib from C/C++, just in case someone feels like spending time on rewriting something that Works For Me ;) There's a support thread on t.m.c, the Python and PySide powered code is available on Github, and the package is available on the website and (hopefully soon) also on Apps For MeeGo.

As for the post-3.0.3 gPodder goodness: Episode list filters (bug 1527) are currently being developed, a first patch is already written, and screenshot 1 and screenshot 2 show you how it currently looks. Don't forget to report any bugs and feature requests over at bugs.gpodder.org - don't keep them for yourself! :p

And now for the next two weeks for something completely different (i.e. Uni semester wrap-ups, exams, lab interviews and lab exercises).. ;) Enjoy the newly released stuff!

A new version of gPodder - a podcast and video manager - has been released today. In addition to improvements to the existing YouTube support, this version adds support for downloading videos from Vimeo (so if you wanted to get ahold of ye olde Maemo 5 "Getting Started" video from two years ago, subscribe to metalab on Vimeo, but I'm pretty confident that you can come up with better uses of the Vimeo support ;).

Anyway, the new king of Harmattan repos is Apps For MeeGo, as everyone knows, and so start your Community QA engines and review gPodder 3.0.3 in Apps For MeeGo Testing. If you don't have the Apps For MeeGo Client on your N950 or N9, click here to download the enabler. It has also been uploaded to Ovi Publish, but if and when it appears there is anyone's guess. Don't hold your breath and switch to Apps For MeeGo for downloading (and publishing if you do!) your open source Harmattan apps.

The 3.0.3 version of gPodder packs some long overdue improvements to the Harmattan QML UI (for example, the toolbar has been cleaned up, an about box has been added and you can now check for new episodes from the toolbar) with more to come in the future. In general, 3.0.3 should provide you with a more Harmattan-esque user experience. You can always get your wishes and problems heard at the gPodder bug tracker - make use of it! :)
Eingestellt von thp um 23:56 Keine Kommentare:

Jukka just posted "No such thing as silver N950 except for Transformers 3 ;)", which reminded me of the movie appearances of the Nokia 770. But first to the silver N950 appearance which I somehow missed: A quick TMO "site:"-search reveals the obligatory thread for the N950-in-Transformers 3 appearance with a frame grab by ro25anav:

As for the 770, it starred in a Harold and Kumar movie, in a Fantastic Four movie and in a Die Hard movie, but you probably already knew that. The 770 appearances are well documented (with screencaps) over at starringthecomputer.com if you don't have the time to watch all three movies. Any other movies in which Maemo devices appear? What about the N800, N810 and N900? Googling doesn't really yield any useful results, with most hits being about "watching movies on device so and so".

After a successful N9 Hackathon in October (where projects like Rodrigo's Forever Alone Hack were started), it's once again time for the local Maemo/MeeGo users to get together and do some hacking in person, so here's the official announcement so you can't say you didn't know ;) 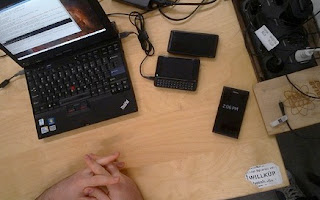 Among other things, we'll try to get some locally-relevant apps (like kelvan's gotoVienna) in shape for apps.formeego.org, see how far we get with open mode and Christian of Maemo 5 Community SSU fame will probably be hacking on some NFC stuff. If you have time, stop by and say hi :)