...displayed inside gPodder. Not only the total time of a podcast episode, but (thanks to the MAFW integration that has been added in 2.8) also the position that you stopped listening to, so you know how much time is remaining. There are several possibilities how to display the progress: A circle sector image, a "position/total" text display and a "remaining" text display. Right now, I opted for the "position/total" display (with "total" in cases where you haven't started listening to an episode). Here's how it looks in the current development version of gPodder: 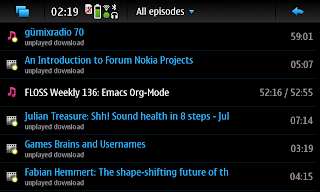 If I remember correctly, the idea for this came up during the Barcelona Long Weekend and was suggested by Tuomas while we were discussing gPodder's UX. Back then gPodder did not store any kind of time-based length information in its database - only the file size in bytes, which isn't that helpful for listening purposes. But since then the work on gpodder.net and the desire to synchronize episode status information between different devices has put everything in place that's needed to detect the duration of episodes (it's even provided as <itunes:duration> (spec) in some RSS feeds) and with the MAFW integration to detect the current playback position when playback is stopped.

If you are using gPodder 2.8 and the built-in Media Player, gPodder already collects this information, so when the next release comes out, you will immediately have some useful data there. This should also help you in deciding which episode to pick on your commute.

What do you think of this feature? Is the current representation the best one, or would something else be more useful to you?

It's time for another release round of some of my lesser-known apps. First up is something that will make all the proud N8x0 owners happy: Maemopad+ has seen its first new release in 7 months, fixing a crasher bug that happens when creating a new database. The new version, 0.37, is now available from the Extras repository. I also noticed that I forgot to promote the version from February to Extras (it was sitting in Extras-Devel all this time), so if you are running on Extras-only, you should now see the first Maemopad+ update since early October 2008 ;) In this case, you also get a new feature that you didn't have before: Full-text searching in the toolbar.

Next up is MaePad, Maemopad+'s Fremantle-ified descendant. Still fighting for its place in the Extras repository, MaePad has not entered Extras due to some unfortunate typo in the bugtracker link. Now that this one has been fixed, you will also get the aforementioned bugfix (from Maemopad+), an update to the Russian translation (by Serge Broslavsky) and two new translations: Simplified Chinese (by hyao) and Czech (by fri). If you are on Transifex, submit your translation for MaePad to be included in the next release! If you are into testing stuff, test MaePad 1.7 now!

Last but not least is Trophae (known in the app manager and app menu as "PS3 Trophy Viewer"), an app that simply shows your trophy progress for your PS3 games. There has been a change on the PS3 website recently, which broke the app, so this provided a nice opportunity to not only fix the bug, but also properly package it up for Extras-Testing - with a new icon, bugtracker link and all these things that lazy developers tend to forget in a hasty first release ;) Please also test Trophae in Extras-Testing if you have about 4 minutes to spare and a PSN ID to test.