Plonk (formerly known as Mong, but renamed since) is now available in Nokia Store for the N9 and N950 as free download:

This is a multi-touch game for two persons, so go out into the big blue room and ask somebody to have a game of Plonk with you :) As you probably already know, this game has been developed at the MeeGo Conference in collaboration with Cornelius Hald and Tim Samoff - sounds have been recorded directly at the hacker lounge by Erik Stein, and Randall Arnold came up with the new name. A real collaborative project, and the source is available from Gitorious! One challenge with Harmattan was disabling Swipe, we solved that with a nifty little class called SwipeControl - it's open source if you want to use it in your game, too :)
Eingestellt von thp um 15:31 Keine Kommentare:

The unexpected lack of lectures today (Tag des Landespatrons) left time for some one-off hacks, and here are two for you:

First up is Tap Tap N950, a very basic QML prototype of what could become a funny DDR/TTR clone - no code published yet, it still need some more polishing (and touch area support for multi-touch, plus scoring is also missing).

The other one is a simple hack to make the Calendar app icon always show today's date (day-of-month). The existence of calendar icons for each day (1-31) in the theme on the device lets me suspect that this feature was either planned and then abandoned or that it will come built-in in some future firmware. For now, you can grab this lame shell script and execute it (ideally with "nohup" - see the comment inside - also needs customizations if you changed your root password, and you definitely need developer mode for now) to have an auto-updating calendar icon until the next reboot. Watch the accompanying video for a quick demo. There's now also a forum thread for support and discussion. Sometimes I really wish cron was pre-installed on Harmattan..

As you know, Austria is one of the few lucky countries in which the N9 is officially available - I even spotted an ad in a local cinema last week (which made me very happy, and I'm usually not very happy about ads in the cinema ;). Now, Nokia Austria is running a campaign until November 27th where you can win a photo shooting and show off your N9 style. If you use the code RHWMZE on the contest website you can get extra points (and you'll find more codes on local bloggers' websites) :) 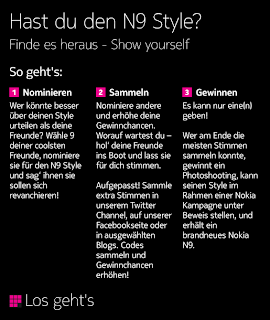 As you might have heard in the video above, you can go to http://nokia.at/n9style to find all the details about the contest. While you are at it, if you have a N9, try out my free apps in Nokia Store. Two more are currently waiting for QA: Tennix and Plonk - yep, that's right: our Pong-style game formerly known as Mong (developed in collaboration with Cornelius Hald and Tim Samoff) is coming to Harmattan - with swipe locking - you can grab the source already now from our Git repository. And your favourite 2D tennis game is also celebrating a comeback, so be prepared for more casual gaming quality time :)
Eingestellt von thp um 23:24 Keine Kommentare:

With last week's Nokia World and today's hands-on event in Vienna, I got a chance to try out the WP7 devices and ask questions about them. Here's some insights that I want to share with you, because they might not be obvious if you haven't tried WP7 before (I haven't until last week, and these things were not obvious to me). I'm comparing the Lumia 800 with the N9 here, because they look very similar from the outside.

As the outer shell is basically the same (or in other words: all hardware features that they fitted into the N9's form factor could just as well be fitted into the Lumia 800 form factor), these things are software limitations that are in WP7 right now (doesn't mean that these will stay in the future). Most basic things that the N9 can do (and the WP7 devices can't yet) can even be done by the N900 and Symbian devices. It's also written from a pure end user experience perspective - I've talked about SDK availability earlier.
What's the point you ask? These are the things that let the N9 really shine compared to its WP7 "successor" (I don't talk about openness, SSH-into-ability, QML, hackability, Python goodness and other things here - that's something that developers like and really, really care about) for end users (it obviously also ignores apps, services, "ecosystems", but I'd argue that the things that I personally need are available on the N9 as well).

It also shows that when a vendor controls both hardware and software, they might be able to put together a more interesting HW/SW mix compared to the situation where someone else controls the software. And it really lets me look forward to the Next Billion(tm) and QML there. But for now, let's enjoy the N9 and create some cool apps (and games) for it, like a FM Radio GUI for javispedro's fmrx app or gPodder 3 (coming soon) maybe?
Eingestellt von thp um 23:29 Kommentare: