I think it was during MeeGo Conference 2010 when I was first told that I should cover the N900 camera cover's blue and silver bevel with a dark color to prevent them from reflecting the flash light and making the photos worse than they could be. If you don't use the N900 with flash at all, this "hack" doesn't apply to you. Otherwise read on. If you look at the N900's camera cover, you see that the camera hole is surrounded by a blue border on one side, and silver borders on the three other sides: 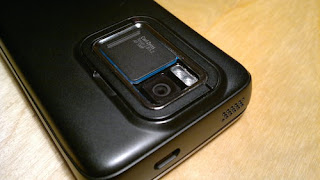 Now, when you take a photo with the flash, the flash light is reflected, which makes the taken photo to appear as if there was some smoke or fog in front of you. In reality it is the reflection of the bevel. So, take a black marker and take off the back cover of your N900 (you don't want to accidentally cover your camera lens with black color!): 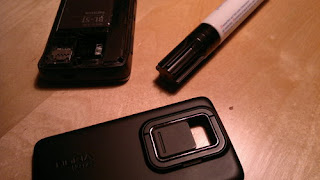 Now carefully cover the silver parts around the camera hole (and the blue part too, ideally) with black color. The result should look like this: 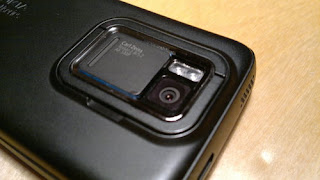 You might get even better results if you take a marker with a finer tip or even use black spray paint or something. If you don't have a marker ready or do not want to paint on the back cover, you can also take off the back cover of your N900 (which has the same effect), but you will probably need a small magnet to trick the magnetic switch into reporting "camera cover opened" to the camera application.
Eingestellt von thp um 10:53 Kommentare:

New gPodder versions for your N8x0 and N9x0

It's been over two months since I've released a new stable release of gPodder. Now it's time again to catch up with some of the fixes that have landed in the "master" branch of gPodder (while we are still adding cool stuff to the "tres" branch, where the QML UI and other improvements happen). Anyway, gPodder 2.16 "Over There" should be available in Maemo Extras for both Diablo and Fremantle soon, please test the package and (in case of Fremantle / Maemo 5) also vote for it, so it can land in Extras eventually.

For the Nokia N950 (and also for the N9), there's already a very early alpha build of the QML for you to try - please note that you might have to remove your database and downloads to be compatible with any changes when the final version is out. There's a thread on forum.meego.com with instructions on how to get it and a screenshot - please also use this forum thread for feedback and any questions that you may have.

In related Maemo/MeeGo news, That Rabbit Game has been packaged for MeeGo Tablet and should be available in AppUp already. There's also a pure OpenGL ES port for webOS, although it's missing some features of the Qt version. If you haven't been following gaming news, our multi-touch game Mong (which is going to have its new name "Plonk" soon) is available for MeeGo tablets and I'll have a Harmattan package for you to try really soon! There is also the Harmattan Event Feed Library for Python which should make posting data to the event feed awesome. And if you really want to port your PySide apps to Android, try PySide for Android, which has just been released today. Yes, lots of stuff happening - expect more in the coming days/weeks :)
Eingestellt von thp um 23:58 Keine Kommentare: